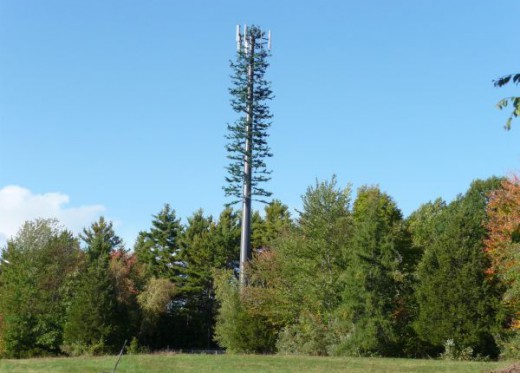 Cell tower disguised as a tree.

A study conducted in Valladolid Spain between 2002 and 2006 noted a significant decline in the sparrow population in areas of high electric field strength (measurement of radio frequency and microwave).

Similarly, coinciding with the roll out of cellular technology, the United Kingdom and other European countries have documented a substantial decline in sparrow populations and other species of birds.  Birds exposed to radio frequency radiation show signs of immune and nervous system stress, noted in part by plumage deterioration, exhibit changes in their reproductive success and changes in behavior.

In a nesting site 100 meters from a cellular base station many young storks died from unknown causes, nest construction failed and storks exhibited passive behavior.

In Avila Spain, town council removed a cell tower when nearby farmers complained it was causing miscarriages in their pigs.  After its removal, miscarriages stopped.

In May 2011 the World Health Organization International Agency for Research on Cancer sent out a PRESS RELEASE classifying radio frequency radiation as a possible carcinogen (Group 2B).

For more information about radio frequency radiation see the  BIOINITIATIVE  REPORT. This 2012 report documents scientific evidence on electromagnetic fields and provides reason for a biologically-based safety standard for cellular technology (current safety standards are thermal-based, not biologically-based).  For an overview of this report, see the SUMMARY FOR THE PUBLIC.

Learn more about our Mission

Keep Baldy Wild’s current activities. These pursuits reflect our belief that environmental responsibility contributes to making our community and ecosystem diverse and sustainable.

Learn more about our Wilderness Projects

Interests on Keep Baldy Wild’s radar.  These interests may eventually become projects depending on their development, urgency, scope of involvement and cost.

Learn more about Wilderness Concerns that effect you.